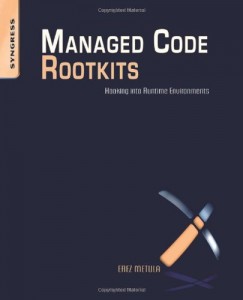 A Managed Code Rootkit (MCR) is a special type of malicious code that is deployed inside an application level virtual machine such as those employed in managed code environment frameworks – Java, .NET, Dalvik, Python, etc.. Having the full control of the managed code VM allows the MCR to lie to the upper level application running on top of it, and manipulate the application behavior to perform tasks not indented originally by the software developer. The MCR concept was introduced in major security conferences such as BlackHat, DefCon, RSA, OWASP, CanSecWest, SOURCE, and others.

ReFrameworker is a general purpose Framework modifier, used to reconstruct framework Runtimes by creating modified versions from the original implementation that was provided by the framework vendor. ReFrameworker performs the required steps of runtime manipulation by tampering with the binaries containing the framework’s classes, in order to produce modified binaries that can replace the original ones. It was developed to experiment with and demonstrate deployment of MCR (Managed Code Rootkits) code into a given framework. Among its features: – Performs all the required steps needed for modifying framework binaries (disassemble, code injection, reassemble, precompiled images cleaning, etc.) – Fast development and deployment of a modified behavior into a given framework – Auto generated deployers – Modules: a separation between general purpose “building blocks” that can be injected into any given binary, allowing the users to create small pieces of code that can be later combined to form a specific injection task. – Can be easily adapted to support multiple frameworks by minimal configuration (currently comes preconfigured for the .NET framework) – Comes with many “preconfigured” proof-of-concept attacks (implemented as modules) that demonstrate its usage that can be easily extended to perform many other things. ReFrameworker, as a general purpose framework modification tool, can be used in other contexts besides security such as customizing frameworks for performance tuning, Runtime tweaking, virtual patching, hardening, and probably other usages – It all depends on what it is instructed to do.